This is the picture that inspired my Wordful Wednesday.
And my poll on the sidebar. 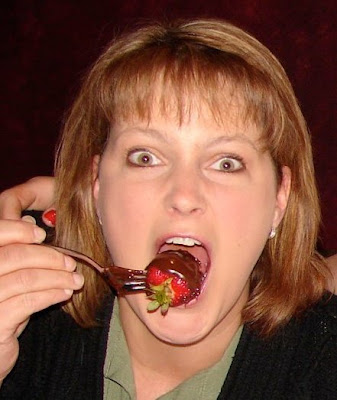 On Sunday we went to a local restaurant for a buffet lunch for my Uncle's 70th birthday.
Thankfully my parents helped out, and Leon was at work. Otherwise I would never have been able to afford it.
The kicker is that the bill included tip.
The food was alright. But the food doesn't make the tip.
The service does.
And the service sucked.
We sat in a room, with dishes piled around us, empty water glasses and no one in sight to ask if we needed anything. It was a buffet. We served ourselves. And nobody spoon-fed me. Which is kind of what I would have expected, seeing as they weren't doing anything else for a tip.
I got the bill for me, Cassie and Liv, and it came to a whopping $69!! (The fact that Liv ate 1/2 a french toast and one chocolate covered marshmallow is beside the point, I suppose....)
I couldn't figure out how it came to so much, and so I inspected the bill. It included a $9 service charge. Which was, I gathered, their tip.
In hindsight, I should have left my money for the buffet, and not the tip. They can't FORCE me to pay a tip, especially at a buffet, right? (No, seriously ... Am I right?)
When you factor in all the tip they made in our little party of about 15 or 20, for no services rendered, they made out pretty sweet. Almost as sweet as the chocolate fountain, in fact.
Which was exactly why I giggled just a little bit when I found Liv huddled up to the chocolate fountain, eating right there, handful of chocolate strawberry after handful of chocolate covered marshmallow!!
Had I been thinking, I would have joined her.
(And a note to my fellow Edmontonians, I don't recommend the Moose Factory. And if you DO go there, don't add a tip to the bill like my mom did earlier in the week, not realizing it was included. Because they will NOT be honest with you when you try to tip them again. Dinner for three was $150!!!! Including both tips.)
Now, go vote on my poll, wouldja?
And then go back to the next person on Awesome Angie's Wordful Wednesday post!
Posted by Rhonda at 9:41 PM

That is highway robbery.

Okay, and what you might not know is that they charged Auntie Judy an extra $40 for the "private room" in which we received that poor service. THEY should have paid US to sit in there, since it was that location that made the service so poor. And when our waiter was told that he hadn't given us the seniors discount, he whined so much that we just caved and paid full price. There were 20 of us at that brunch, and I can tell you that they made a fortune. Auntie Judy paid a $50 tip on top of her bill!!!!!!!!

I have no idea if they can 'force' you to include the tip, but I hear ya. I hate how tipping has come to be expected no matter what the service is like. Tipping is extra, not required. I see this a lot in my job as a travel writer, and it bugs me every time! (Also, we can never eat enough to justify the expense of buffets, either. I wish there were 'buffet lite' options, for my kids who will eat half a pancake and call it good.

I´m sure I will never ever ever go there and thanks for the heads up.
That´s just plain robbery!

They should at least let you know somewhere that they are going to include the tip, then you know what to expect.

I don't like it when they include the tip with my bill... especially when I don't actually have a waiter!

My husband is a pretty good tipper as long as the service is decent. I agree that I work hard for my money and the waiter should at least keep my water glass full!

Doesn't seem fair/right to me!

Thank god we dont really do tipping here. Well we do at restaurants but it is a purely personal thing if you think the service is good. Thats is just highway robbery Rhonda. And reading what your Mom said its evern worse than that. I would write or ring and complaint to them. Seriously.