A Little Healthy Competition Is Good ... But This? 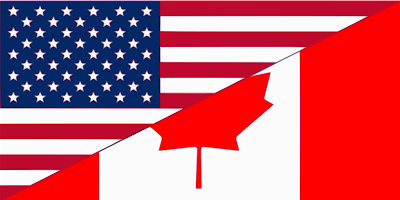 I spent some time last night on the Vancouver Olympics live stream.
I was very sad to see how angry and mean people were getting over Canada/USA medals, attitudes and today's hockey game.
There was talk about "owning the podium".
USA would comment on the arrogance of Canadians.
Canadians would comment on the arrogance of Americans.
Phuc (is that not the coolest name EVER??) was telling this other guy to "Go and died!"
That guy is getting nasty about Phuc's broken english and being equally cruel in general.
There was talk about hockey being Canada's game and that we'll show them how it's done.
Talk from the Americans about the "stench" of Canadians.
It was truly horrible.
You know what? It's a bunch of professional, million dollar hockey players just changing up teams for a bit.
Personally, I think that USA has a pretty damn fine goalie who will be tough to put anything past. And I think that Canada has some equally fine players who also know how to play their game.
It's hockey.
I hate that this game is taking away from all the other athletes who have worked so hard to get Canada's 25 medals and USA's 36!
All those other medals matter too. And not JUST the gold ones. And NOT just the hockey ones!
Personally, I hope that Canada wins of course. But I don't have anything negative to say about Americans.
I think they have done a great job. They have broken the record for total medals. That is awesome!
And I have friends who are American and I think they are pretty darned awesome!
So good luck to our neighbours today.
May the best over paid professional team win!
Posted by Rhonda at 10:18 AM

I have to agree... the name calling gets out of control... and really doesn't add to the game...
So glad that the athletes themselves don't appear to be participating in the actual name calling - they are enjoying the actual game :)

I absolutely agree! Of course I cross my fingers for some in particular, but I believe the best should win!

They're just games people play, and the world held its collective breath a huge number of times over the past 16 days. With a bit of luck, the name-callers and negative nellies will soon be forgotten in the mists of time and only the true spirit of the games and these amazing athletes will stay in our hearts and our memories (how's that for a run-on sentence - lol) forever.

Sport brings out the worst in people unfortunately. But I have to say, GO CANADA! Well you are a Commonwealth country like us....and I have loved watching the Games more than any other. And Gawd you have to be tough to play that game!

Love the pic of your beautiful girls, oh girl you must have fun times ahead (or here now) with all the boys waiting in line.

I honestly cheer for the "home" team in the olympics most of the time. Don't tell my fellow americans that, though!

Wow! I guess I missed out on all the name calling! I knew it was getting ugly but "Go and Died!" that's just too far!

haha! Great post! I'm your book exchange partner! I don't know if you got my previous e-mail so just let me know if you didn't! So, What types of books do you like?!

I agree. Competitions are supposed to help you grow and improve and not mock each other. ITs just sad...

Dropping by from SITS! HAve a great week!