I'm A Learner Of Lessons.

I'm a sponge.
From Jerry Springer, I learned that my life isn't near as bad as I thought.
Now, while I do admit to several people in my family having children out of wedlock, a f*cked up sociopathic ex-fiance, a cousin who, while doing time in prison got a sex change operation, and just your average dysfunction, we are not THAT BAD.
From the lady driving in front of me today, I learned never to end up behind her again.
She seriously went straight through a turning lane, which, once she crossed the intersection became the lane for oncoming traffic. She. Didn't. Have. A. Clue.  She just kept driving.  I mean, what an IDIOT!!
I do admit to doing that once too, but in my defence I was on my cell phone complaining to my husband about our stupid passport office and racing to Costco to get a new picture with two kids in tow before my number was called 20 minutes away!  lol

From my current job, I learned to appreciate my former co-workers even more than I already do!!
No explanation needed.  I do not long to be Dooced!!  (I know you're giggling right now, thinking I misspelled douched, but rest assured, I do not LONG to be douched anymore than I long to be dooced!) 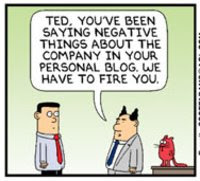 From my husband and children, I learned to just shoulder the blame, no matter what. Oh boy, do I feel you on those last 2. Well, I can't honestly say I appreciate my former co-workers because they were mostly ass-hats. but I feel you on complaining about the ole' job. But you knew that. lol

Ahhh shouldering the blame. It seems my boycott against laundry is backfiring. Everyone just gets dressed in the laundry room now, because that's where ALL the clothes are. Pffft, undoubtedly it's my fault.

What? You too? But how can anything be YOUR fault, when I was sure it was all MY fault? Huh? Who knew? Just remember, you can have all that other stuff, but the national debt, that's still mine. All the wives and moms out there know just how you feel.

I think 5 minutes of Springer will make just about anyone realize their life is pretty tame. :)

Sometimes I feel like I need to shoulder the blame, too, just to get all the crazies who want something from me to go away. And I don't want to get Dooced, either!

That is funny. Tell me surely no-one is as bad as those that appear on Jerry's show. They pay them dont they? Please tell me yes.