Once Upon A Time A Really Drunk Chick Walked Into A Hotel Room In Vegas...

The first night of the conference last weekend was a dance/ice breaker sort of thing. I missed the intros earlier because of my flight time/shuttle fiasco, so I went in cold, not knowing anyone.
And like I said before, in those situations I keep a drink in one hand and my camera in the other. Trish said she thought that I was the official photographer! lol
Notachance.
Eventually I went and sat at a table and I was joined by first two wonderful bloggers, and then two other wonderful bloggers.
The first ones were Kim and Katie from L.A. And for the life of me I cannot get my poken (electronic business card sort of things we all got) to work, or to rephrase that, I cannot figure out HOW it works, so I can't link up to them, which is too bad.
The second pair was Trish and Leslie from North Carolina. I went for dinner with them on Saturday night and went on the roller coaster with Trish's cousin Katie (different Katie from above) and wandered the strip with them. They. Are. Awesome. And can you believe I didn't get a single picture with them? Sigh...
I did have a good many drinks that first night. In my defense they were small glasses. But I did have many. Because they were free. Finally I decided it was a pain to keep going up to the bar every five minutes, so the last time I went up I got two. 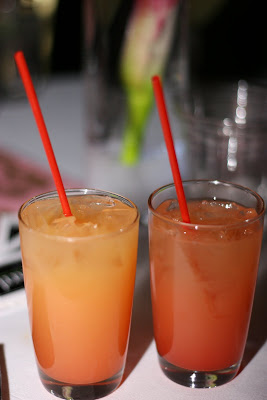 Wouldn't you know that my timing totally RULED because they changed over to a cash bar MINUTES after I filled both my paws! I should have bought a lottery ticket. Or played a slot. THAT is how rare a stroke of good luck like that is for me.
Anyway, once it changed over to a cash bar, the crowd thinned out pretty quickly. So I took my drink and sloshed my way up to the casino. I soon went up to my room, but it didn't take long to discover that I was pretty damn drunk and would not, could not, stay in my room.
So what does any normal drunk chick do when she is in Vegas alone?
Why she wanders the strip of course.
I found myself going in beautiful hotels by the front door, and somehow going out the back.
Not safe. Or smart. But it was what it was and that night I was INVINCIBLE!
I ended up in Walgreens where I bought Liv's stuffed dog.
I found myself giggling up moving sidewalks.
I was fortunate enough to see THREE pirate shows outside some hotel while the normal sober person only got to watch one. Sucks to be them.
I did finally stumble my way back to my room around 1:00. It took me about five minutes to figure out how to open my curtains to see the view from my upgraded room. (Those pictures will follow tomorrow. You will definitely want to come back tomorrow, because that is when I will be showing the majority of my Vegas pictures, including the "view from above" and pics of the speakers from Saturday.)
It turns out there was a remote control for the drapes. I know. Whodathunkit?
There wasn't much to see in the middle of the night, except the glow from the pools below.
I had been bumped "up" to the 20th floor.
I could look down at the Tao Beach Club, where Kim Kardashian (or whatever) was celebrating her birthday party.
And I could hear it. Oh Lordy, could I hear it.
But really, I was pretty stinking drunk. I mean, I didn't dance around my room or anything.
That would be just embarrassing to admit.
So I won't.
But I might have.
Briefly.
While giggling.
My bad.
Of note, I was almost on time for the conference first thing the next morning. 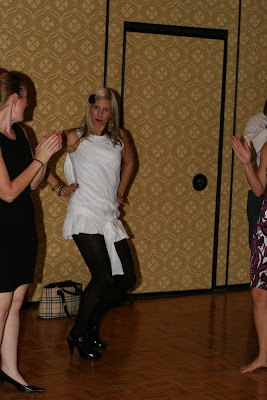 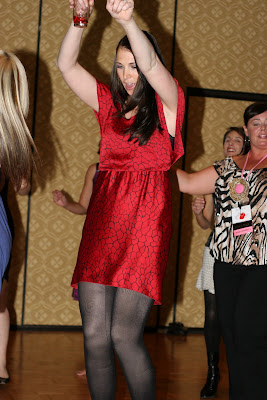 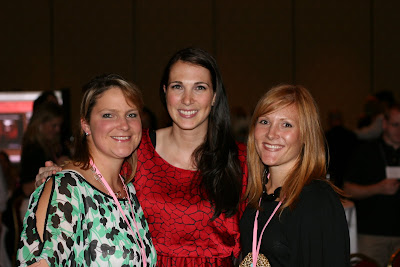 I wish I'd been there. I do believe I did all those things the last time I was there...I can't go along again! :)

Vegas is sounding more and more fun every post..

I know y'all had fun! I wish I'd been there!

There you are looking all pretty! It sounds like you had fun...I do wish I could have been there :)

Oh I so wish I could have walked the strip with you! That would have been hilarious! I can just imagine. I´m glad you had fun!

LOL! Sounds like you had an absolutely wonderful time! GOOD JOB!

And memories are made of this! It sounds like you had a great time, overall, and made some memories that will stay with you for a long time. Good for you!

You hold your liquor well. I would have never thought you drank much at all. And going out the back doors of casinos? Glad you are OK.......next time I'll wander around with you. :)

Ugg... really wish I would have found that party! I was wandering around the Molly Maid banquet rooms looking for signs of bloggers.