I just finished The Other Boleyn Girl. 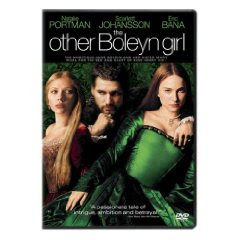 Phenomenal.
With some 21st century exceptions.
There are some other stories that you can read that go hand in hand with this one, by other authors.
The version I just finished reading, however, was The Other Boleyn Girl.  Mary. The sister of Anne.
It was well written, easy to read, and entertaining.
However.
It bugged the hell out of me that men actually thought they were smart enough to get the Boleyn Family to the thrown.  The girls then, and still in some areas of the world, were at the mercy of the men. The must follow their instructions, no matter what. They are single-handedly responsible for the rise, or fall, of their family.  Even if it was following the instructions from the men that caused the fall.
And that irritates me.
They are ordered to be the King's mistress.
Then called a whore for doing so.
They are to produce an heir.
Then blamed and cold-shouldered if that babe is "only a girl".
They are to produce an heir at any cost.
Then charged with witchcraft, potions and adultery when they do so.
I wanted desperately to stand up and have a hissy fit when the "other Boleyn girl" kept doing as she was bid.
The only other thing that irritated me about this book was the names.
See if you can follow along.
There was King Henry and Queen Catherine.
King Henry and Queen Catherine had a daughter, Princess Mary.
The Boleyns had two daughters, Annamaria (Anne) and Maryanne (Mary).
Mary Boleyn was married to William Carey.
King Henry and Mary Boleyn had a daughter and named her Katherine.
King Henry and Mary Boleyn had a son and named him Henry.
Anne and Henry Percy were married briefly.
George Boleyn married Jane Prescott.
Jane Seymour was the queen that followed Queen Anne.
Mary Boleyn married William Stafford.
Mary Boleyn and William Stafford had a daughter and named her Anne.
George had a "friend" named Francis.
There was a King Francis named also.
And somehow out of all this mess, King Henry and Queen Anne had a Princess Elizabeth.
Where the heck did THAT name come into this?
It led to some confusion, I found. I mean, really, did they not KNOW any other names back then?
And yes, I technically just gave away some key points of the book.  Sorry.
I highly recommend this book.  I now feel good about renting the movie.  I can never read the book after the movie.
^*^*^*^*^*^*^*^*
The next book review I have for you is:
The Devil's Feather.
I absolutely could NOT get into this book. It is very political, and anyone who knows me knows that I don't go for any of that. It may have ended up that it wasn't so much if you can ge more than a few chapters in. I don't know. Not a book for me. I'd love to hear someone's view on it who DID manage to read it though!! I only got about 50 pages in.

Another that I have recently read was Jodi Picoult's "Handle With Care".

This book disturbed me. It really disturbed me. I read it through. As usual, Jodi Picoult has a great writing style. And she is unquestionably controversial. But they are always so freaking sad. I wanted to hug this little girl to me, gently, and never let her go. If you are a Jodi Picoult fan, like me, you will surely read this book and I would love to hear your thoughts on it.

I am currently reading "A Heartbreaking Work of Staggering Genius".

However, I just came from my mom's house, where I found The Queen's Lady sitting just waiting to be read. I am hoping to fly through my current book, which is from the library, and then put my nose into this Queen Catherine version, and not come out until I am finished it. I'll let you know how it is!

Also on the queu, but unfortunately probably with not enough time for me to read it before Ronda's Bloggy Book Club, is Tender Graces. 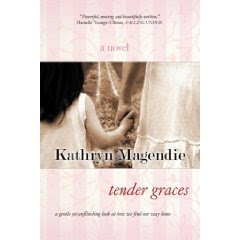 I am hoping to find that one here in Canada.  I just checked amazon and it costs me more to ship it than it does to buy the book.  Harrumph!  I will keep checking and hopefully can get my hands on it.  Ronda highly recommends it! The author is also a fellow blogger!!  Can we get a What What for that??
I'd love to hear what you are reading this summer!
Posted by Rhonda at 8:31 PM

Dang Girl, how many books do you read in a week? I'm lucky if I read one a week. LUCKY.

Wow! You must be a really fast reader! I can´t even finish one book a month!
That first book sounded really confusing and I already clicked "off" on that. But I´m a fan of Jodi P., so I´ll be checking that out. Hopefully it will be on bookmooch. :)

Thanks for the reviews! I kind-of skimmed through The Other Boleyn Girl one because it's on my list of "to reads". But i will def put Handle With Care on my list... I just got finished reading The Pact and loved it. So good. I do love her writing style. I need to put The Art of Racing in the Rain on my list too - thanks for the heads-up on that!

Right now, I'm reading Same Kind Of Different As Me - and I'm totally digging it. Easy, good, inspiring read. Makes you want to be a good person.

Can anyone join your bloggy book club? That sounds like fun to me...

I also hate seeing a movie before reading the book. The book is always better, without a doubt.

I'm currently reading The Guernsey Literary and Potato Peel Pie Society - I'm really enjoying it. It's written as a series of letters. Even so, I have gotten a real sense of the characters. There is some humor in the letters, albeit subtle (though I still laughed out loud).

I just finished My Life in France, about Julia Child. I now have a fondness and newfound respect for her.

I also read Julie and Julia - the book based on a blog. Julie cooked all the recipes in Julia Child's Mastering the Art of French Cooking - in a year, and blogged about it.

The movie Julie and Julia comes out this Friday. I know I'll be in line for that one.