And Merry Christmas To Me!

My year started out really crappy.  Nothing seemed to go right. Ever.
It got to a point where I thought I might be better off impaled by the grill of a Mac truck.
But suddenly in about early November, things really turned around.
I accepted me, as gushy and jiggly as I am.
The jerk's insurance company paid for the ambulance bill that I was fighting. And losing.
Financially, things weren't quite so tight.
We had a wonderful Cancun vacation.
And I started winning some stuff.
Yesterday I got the tea set I won from Angie at 7 Clown Circus when she was doing her million days/million winners (or something like that) contest with some of her blogging friends.
And then on the way to soccer, George gave me the other thing that had come in the very same day! I got the brand new, not even on the market yet, popping chocolate bars from Veggie Mom's Pay It Forward contest and their Pop'rs company. 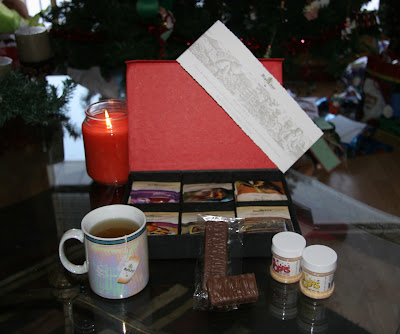 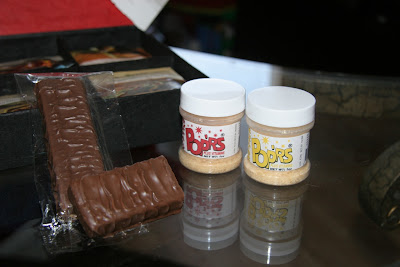 And the week before that I received the other package I had won through Veggie Mom.  Two Pop'rs flavours! And they are SO COOL! I've actually just been eating them right off my hand, although I know they are supposed to be sprinkled onto your food.
And yes, the chocolate bar is half eaten. And since this picture was taken, it is missing even more of itself.  I cut up a couple of little pieces to hand over to my family to try and they have since been looking for them to have more.
But my generosity only goes so far.
So I'm off to drink my ginger tea from Angie, in hopes that it will ease my hangover, and to finish that chocolate bar, which is incredibly delicious. And it dances on my tongue.
I'll bet it's not every day you hear that.
Oh, and I handed out one of my own Pay It Forward gifts yesterday to Why-not: One very dead poinsetta (One would think that a Christmas plant could endure a couple of hours in my vehicle, but alas...) and some home-made cookies that made it over there INTACT.
Betty & Ronda are still patiently waiting for those. And I haven't forgotten!
Posted by Rhonda at 1:01 AM

Yes, a VERY Merry Christmas to you, and the HAPPIEST of New Years! So glad you love the chocolate and the Pop'rs, and hope Santa is extra-special nice to you on Christmas Morning!

I am SO happy things have turned around!!!

I am sure your life is so much better also because I came into your life! :) and who said I am patient...come on lady ...get the lead out! Kidding!!!
I am so happy things are getting better because your blog is just so much fun to read and you deserve only good things!

Listen up, baby girl o' mine. When it comes to dead poinsettias, this one is the prettiest one I ever received. I love it. I'm hoping it will play Lazarus to my Jesus. I'm working on a Christmas miracle. Love you.

I love hearing that you have won so many giveaways and that you are feeling "life's abundance"!! I have really enjoyed reading your posts. You have a wonderful sense of humor and you have a terrific blog. It is hard to tell someone when times are low that they will be better. Or you can tell someone but when times are low they just don't believe you. Now you have joined the club of people to can tell someone else..it will get better. The pay it forward concept can sure apply to helping someone else live abundantly. Everyone does it in their own way and you do it with every post.!! Merry Christmas Rhonda! Can't wait to get to 2009 and read your posts then!

I´m glad your year turned around for you!