As promised (well, not really, but it makes me feel valued and oh, so loved) I will now enlighten you in the not-so-proper ways of teaching, and learning, to spank the monkey.

I lived just down the street from my elementary school.  My friend, however, lived further away. So, against my mother's warnings and death threats, I would walk my friend through the first boardwalk, and then walk down the alley to get to my house.
There were times when that alley was not altogether safe.
It was where I got chased during that first week of my grade 7 year by my brother's friend, who was armed with shaving cream.
There was the first week of grade ten when I was chased yet again by froshers down that alley, but at least that time I didn't have to outrun them. I only had to outrun my friend. Which I did.
It was where I was cornered by two snarling doberman pinschers. I was eventually saved by neighbours who were driving past.

And there was the time that a car stopped me. It was a light blue four door with a man driving. He asked me if I wanted to see a trick. I said okay, knowing better, but also, you remember, I was not one to embarrass myself or others, or make anyone feel bad.
I actually walked right up close to the car and watched through his open window as he dug in his pocket for, I was assuming cards or balls (you laugh, but I actually thought this was a possibility).
Nope.
He brought out his "thingy". I swear to this day, he did not actually reach inside his pants. He seriously did go into his pocket. He must have had his zipper open and just kind of maneuvered through his pants. Perhaps he was worried about scaring me off before he had a chance to finish what he had started.
He spanked it and milked it in just a few short strokes, my friends. I mean, he was good at it. If only I knew then what I knew now, I'd have been embarrassed for the poor bugger. It was that quick.
And then he looked up at me and said "See? Wasn't that neat?"
I responded with the ever-polite, "Uh, yeah."
And then he said good-bye, and I walked the rest of the way home.
I told my brothers what happened. You aren't gonna' believe this, but I was THAT naive as a kid, and with two older brothers even, I didn't realize JUST how bad this act was. Weird? Yes. Illegal? Hmmmm, really?
When I saw my brothers' reactions, I got so scared. I thought for sure I was gonna' be in trouble. And for more than just going through the alley. And I was so painfully shy, I just wanted to forget the whole thing!
But, no. My parents had other ideas.
Hey, they thought, let's take this shy little girl, who still has no clue what was so bad about what she had just witnessed, and make her tell two male police officers. 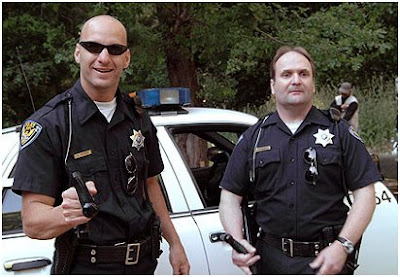 I had already locked myself in the bathroom. I just sat on the toilet lid and cried. I was mortified. (Yes, you can be mortified without even knowing the word.)
So I told my mom what had happened while we were in the privacy and comfort of the bathroom.
And then I either got coaxed out, or dragged out, kicking and screaming. It's possible that the police even came into the bathroom to talk to me. It could have been done by morse code with the water tap, or by slipping little notes back and forth underneath the bathroom door. I haven't got a clue.
But I do know that I told my story and that they were very interested in finding this guy. I had to give his description (ummm, about four inches?) and tell them about his car.
I don't think they ever found him.
I understand their urgency now.
I know that pedophiles get worse. He was probably just putting out perverted "feelers" when he stopped me because magazines and videos just weren't cutting it anymore. Perhaps by now he has a child held hostage in his sex room in the basement. Or maybe he is in jail.
It could be that he was totally disgusted with himself and never did it again. Not likely, because he wasn't nervous at all. He seemed quite comfortable, actually.
Regardless, being a mother now, this story is enough to make me throw up. Two of my kids, the oldest of whom should DEFINITELY have known better, just followed some stranger home from the park for ice cream only a couple weeks ago. Yup. Off they went, without a concern in the world.
We drove around and eventually found them, completely oblivious to the wrath they were bringing out in their mother and to supper getting cold on the table at home. (I really was more concerned about my children than angry over the cooling food, but seriously, it was a roast and smelled FANTASTIC!!)
I digress...
I hope you enjoyed my Memorable Monday story on this fine Tuesday.
And for the love of God, if you have a child like I was, lock it in a room until it is around 20.
Posted by Rhonda at 4:00 AM

How scary. Where do they come from? I mean what happens to make them sicko's like that? My kids are oblivious to any kind of trouble and we have a registered sex offender that lives 1/2 block from the school. Makes me crazy.

THAT is one of the reasons we moved to Paraguay. Of course it could happen here too, but since we live in a small town, it is less likely.
This story shows me how adorable you were as a child and still are for telling us!

OMG...When you talked of this yesterday...I thought some nasty got nasty with you recently!!! A mother's worse nightmare...why oh why would someone do that? Thank God that's all that happened!!! BTW...What is a frosher?

Froshers are the losers in higher grades that like to torment younger kids with shaving cream and eggs as they get to each of the 'lowest on the totem poles' grades in a new school level. It lasts the whole first week of school.

It's kind of like hazing the newbies in college, but not quite so drastic.

I think many schools have made punishments more severe for this, so it isn't as popular anymore.

Lord, that's a terrible story. It sickens me all over again reading your memory of it. Mine is a bit different – murderous rage comes to mind, and not directed at you, either. As a parent you just want to find the perv and spend a few minutes alone with him, maybe with some live electrical wires and some plyers. And a cattle prod. You were an adorable seven-year-old child dressed in a fuzzy white bomber-style jacket. You had a sweet, shy smile, and used to ask the neighbour across that alley for some baloney. She still talks about that. Like we starved you. And to think, we still live in front of that alley. My sweet girl, I am so sorry that we traumatized you more than the perv did.

Actually, I think I was nine. It was grade four.

Regardless, it was icky and wrong.

Oh Rhonda, that IS terrible.
I was just as naive.
The worst of it for me was that our neighbour...yes...right next door to us...stood at his kitchen patio door, which faced our back walkway and did the same thing, with one hand, wearing a robe and smoking a cigarette with the other while I stood and waved at him. Freaky man. Social Services were informed and the guy got a slap on the wrist with a warning. My mother was livid!
That doesn't beat the time that another neighbor, further away in a different city, invited me into his house...into his attic to look at all the dead animals he kept in jars of formaldehyde up there. WEIRDO!!! I assume I have not blocked out any worse details but he could have been showing me 'anything' up in his attic!

OH MY GOSH... that is all I can say. Whoa. You are so lucky! There are wierdos everywhere aren't there?

I'm pretty stuck on OH MY GOD!!!! too. You told that story so well though, and had me giggling.
I am SO lucky that my kids don't talk to strangers. They don't talk to anyone they don't know. My stepson, however, would cheerfully hop in a car with anyone on earth.

Oh my gosh. That's some trick. Barf. You managed to make a pretty terrible story funny though- you know, being embarrased for him and all. What is a frosher?

EEEwwww! Only you can make that scary disgusting story funny! Thank you for the birthday wishes, girl! Love ya!