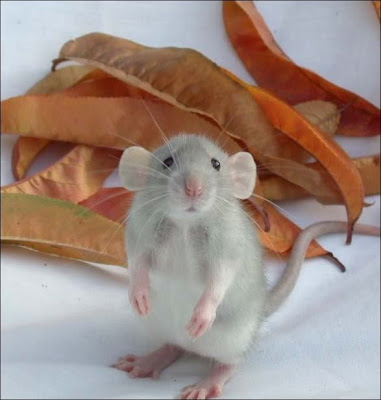 This may freak you out a little, but this theme could go on for more than just a few weeks.
For someone as squeamish as I am in regard to x-legged creatures, I have had more than my fair share of dealings with them. I say x-legged because they range from no legs at all, to eight legs, and all the even numbered options in between.
For the next little while, we are going to stick with the four-legged variety.
Mice.
In one of our past houses, the previous owners had an illegal gas line for their BBQ, so they took it out when they left, and did not fill the hole.  It was under the deck, so we were completely clueless as to the havoc it was about to cause.
One day while cleaning out underneath the kitchen sink, I found poop.
Mouse poop.
All together now, "What the EFF??"
So as soon as Leon came home traps were set and I was a little bit nervous. I have had mice before, albeit in my old high rise apartment building, and they were my mice. That is a post for another Monday, though, and I knew the S*N*A*P of the trap. And I knew that it didn't always kill them.
One night very soon after, while sitting watching TV by myself, I heard it.
And the ruckus that followed was CRAZY!
Slam! Slam! Slam! Crash!
So I very quickly went and woke up poor Leon who had to be up in a short few hours.
Priorities, people.
There was a hole cut out of the wall to make more of an open concept kitchen/diningroom/livingroom. So there I stood on the couch, watching through that opening as Leon went in.
He was armed with nothing but an empty margarine container and his underwear.
Crouched in front of the sink, he gingerly opened up the cupboard door, margarine container at the ready.
WHAM! WHAM!WHAM!WHAM!WHAM!
Gott'em!
The little bugger was caught in the trap, but was running for his life, trap strapped securely to his leg.
Don't feel sorry for him.
Feel sorry for the one who had to launder those tighty-whities that her husband was wearing!
For the life of me, I don't remember how we disposed of that mouse. There were so many other bodies on it's tail (pardon the pun) that the first one has completely faded from my memory.
While I'm not proud that we killed so many of God's icky creatures, it had to be done. Many, many times over.
Tune in next week for more Mouse Tails Monday mayhem!
Posted by Rhonda at 9:29 PM

Ewwww!! I hate mice with a passion too!
Just the last week, I went into our shed and two little buggars scurried into the stuff we have stored there! So, guess what hubby gets to do this week? :)

OMG! I hate it when they startle me. I'm nat afraid of mice but when I'm startled I want blood LOL... Good luck micing.

Gaak!! Why did you have to find such an adorable looking little mouse-face for the top of your page? Dang it all. I almost feel guilt for the mouse-cide I have committed in our garage. Almost.

Mice freak me out!