When You Give Your Mom Your Camera....

Asia's last cheer competition was last night and I feel it's necessary to toot my mom horn for a minute.
Asia is fabulous. I'm not just saying that. She is a performer at heart. One of their "tops" was sick yesterday, so Asia had to step in and learn that person's part in 15 minutes. She nailed it! She was scared as all get-out, but she rocked it!  I am so proud of that girl!
Moving on.
"The Boy", as Liv has so aptly named him, came out to watch the competition last night.  You remember I was telling you about him and Asia meeting last weekend.
This kid is amazing.  His Mom has definitely done something right.  He's smart. He's nice. He's cute. He played with Olivia. He wandered around the mall with Cassie. And I think he really adores my daughter.  He didn't take his eyes off her while she was competing. I don't know that FOR SURE, because I couldn't either, but I'm pretty sure anyway...
This is their one week anniversary of, ummmm.... I'm not really sure what.
Take a look and you tell me. 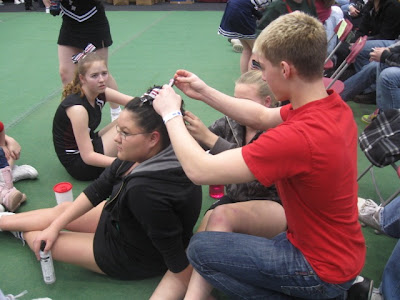 He got roped into helping take out curlers. 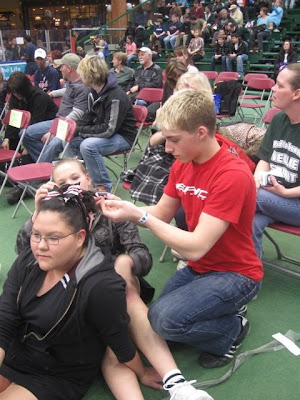 And he doesn't even look slightly embarrassed! 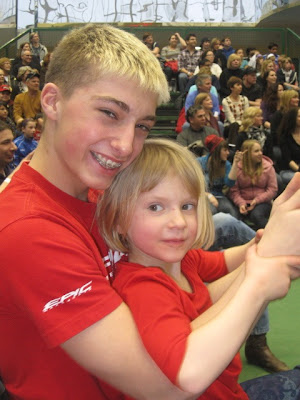 I think Asia's going to have some competition.
Liv adores "The Boy". 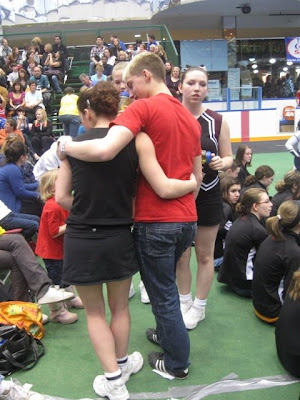 So, apparently, they aren't really dating or anything...
Huh?? 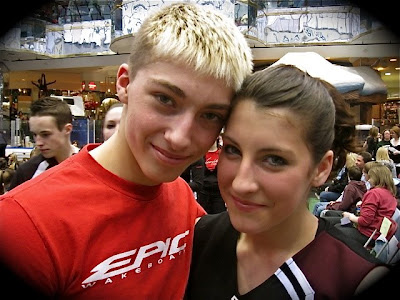 I don't often root for these young relationships.
But I really like this one.
And I'm going to thoroughly enjoy it while it lasts.

Just dropping by from SITS to say hello! Love the blog! Love your extreme photography talent! I can tell you are a fabulous Mom, too!

They make a cute, sweet couple :)

I´m sooo jealous of you right now! To see your daughter in love is the best. Even if mine found someone right now, I could not enjoy "seeing" it.
So, yeah. Savour it!

Oh how sweet - he looks like a nice boy. Oh they grow up so fast too. Enjoy!

Just wanted to pop-in to thank you for entering a past giveaway I had on my blog - I would like to inform you of another giveaway I have open right now (Girl's Paisley Swing Top)! Winner will be announced on 3/20 - so enter by the 19th :) Also - I've got future giveaways planned, so keep a look out!

Does Asia know how lucky she is? There aren't that many "keepers" out there!

He's a cutie! I hope it all goes well. Congrats to Asia!

Ah… but… wha?… bu… bu… huh? WAAAAAH! My baby girl is just a baaabeeee! He does look sweet, but geez Louise, why does this make me so… dumb-founded!!