The deciding factor on this last minute trip was something called "Flat Stanley".
I was thinking that this vacation was not the right time, we couldn't afford it, wouldn't find child care. You know. The usual.
Then, suddenly, in the mail, we get this thing called Flat Stanley.
Flat Stanley is a school project that George's cousin's daughter is doing. Flat Stanley has until May to travel around from person to person, for a couple of pictures and stories of his travels. Then the person who has him in May sends him back to the school and the kids will see where Flat Stanley has gone and what he's been up to.
I took one look at this little book and thought, it's kismet. It's fate. The timing could not have been better.
When George got home, I looked at him and told him about Flat Stanley, and how desperately I wanted Flat Stanley to go to Cancun.
And that sealed Flat Stanley's fate.
We took pictures of him on the plane, 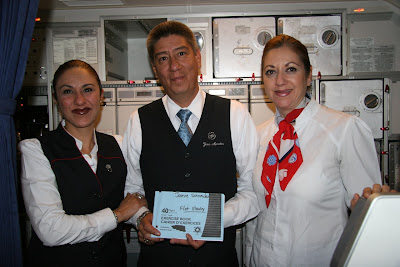 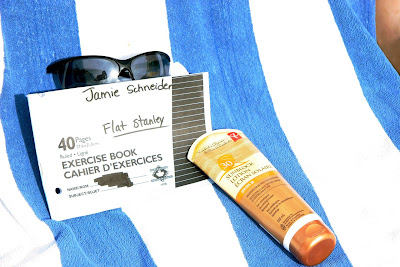 in a palm tree, 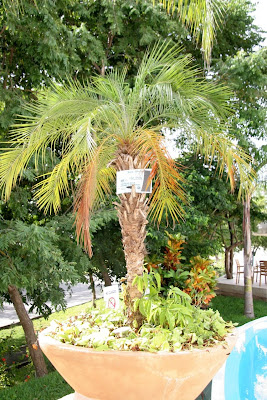 and with Senor Frog. 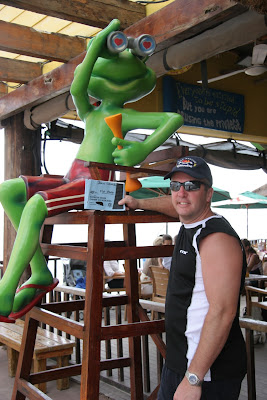 He had a great time.
But now, it's time for him to move on.
I would love for Flat Stanley to see much of the world before he goes back to Winnipeg.
I'm thinking maybe to Carrie in Wisconsin?
Or Ronda in Florida?
Betty in Paraguay?
Perhaps even Lilly in Australia?
Wouldn't that be totally cool for Jamie to get Flat Stanley back and he has traveled to so many wonderful places??
They would have to be willing to take Flat Stanley to a special landmark where they live and take a couple of pictures. They would have to write a short story, using a page or two of the book, and then send it on to the next person.
Which means that they would have to be okay with giving their address to a complete stranger or two, via myself.
So, what do you think, my friends?  Is this do-able??
Posted by Rhonda at 1:01 AM

I`m in ! Sounds totally fun and I`m always up for that. Where do I send my address?

Mr. Flat Stanley will have the time of his life...all though now that he is seen Cancun...maybe Florida won't be so much fun! I;ll just get him plastered and he won't rmemeber a thing...kidding!
Sign me up...I'm in!
Maybe I can talk Bob into another trip...for Flat Stanley's sake!
I am so glad you are back...we missed you! :)

Let me know if Flat Styanley wants to come to California!

Let me know if Flat Styanley wants to come to California!

That Flat Stanley travels much better than most of us. I hope he's having a good time, and is treated tenderly by Canada and U.S. postal people. Go Stanley!!

I have a friend in Germany who would SO love a visit from Flat Stanley!

Flat Standley looks like he had a lot of fun.....lucky guy!

ha - our friend mailed this to us while we were living in china for his daughter - but it was an actual character!

My daughters Flat Stanley got lost in Australia somewhere.

That is hilarious!!! I am so up to host Flat Stanley in Australia and promise not to lose him. Love the idea. Once I took my father's ugly garden gnome to Paris with me for a joke. There are pictures of it at all these landmarks - he he. Your holiday looked like fun too!!

I went out with Flat Stanley in high school. That is how long that guy has been getting free rides from people. Whoever gets Flat Stanley needs to practice safe writing because God only knows where those pages have been!

I propose we have a little Flat Carrie party and send her a few places.