Me, An Airplane, And A Very Private Guy Traveling Alone.... Oh, Add 9-11 And My Imagination Into The Mix!

Are you ready for some photo phun? Check out Candid Carrie! She has a whole bunch of whacy participants! 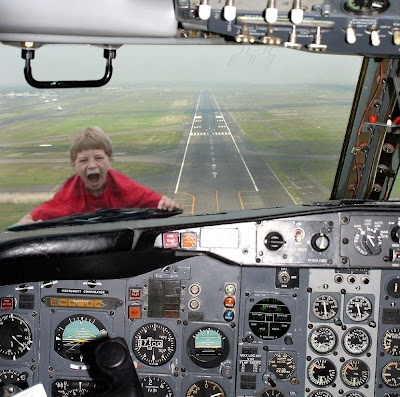 We are leaving today for Cancun/Playa del Carmen. I have been remembering all week our last adult only vacation. It went very well, but it was only weeks after 9-11 and I was terrified that I was never going to see my babies again!
I even stopped at a store in the airport and bought a very mushy card and mailed it from the airport so that the last time they heard about their mama, it wouldn't be on  the news while they showed a smoldering heap of metal in the background.
While we sat there waiting, we looked at every single person. Some traveling solo. Some very suspicious looking characters (that actually ended up being pictured on Wordful Wednesday two days ago!!!) I thought should NEVER be allowed to get on that plane, and if they allowed it, well then, by God, I was getting the hell off!!
I went over it in my mind, how I was going to single-handedly save us all from the terrorists that were most certainly boarding alongside us. I'm a crazy woman with babies at home. Don't mess with me!
We boarded the plane, this poor mama almost in tears, I was so scared! We sat in our seats. We looked around.
Lo and behold, one of the single guys sat in the AISLE seat in our row. I tried my best to strike up a conversation with him. I HAD to get the dirt on this guy.  And fast!
I asked if he was heading out on business or for a holiday.
I asked if he was traveling alone.
I even asked why on earth he would go to Mexico by himself.
I know that was rude, but people, I was desperate! And scared. And I didn't want to have to resort to crazy bitch if I didn't have to.
When we got our cards we had to fill out with our information on them, George watched out of the corner of his eye as he filled it out.
His last name was Smith. And he only had a first initial.
And his address was a box number.
Holy Good God Almighty and Sweet Jesus in Heaven above!  Hug my children tight, and don't let them forget that their mama loves them very much. Make sure that they know I was screaming their name until I hit the pavement. Please do that for me, okay?
I was squeezing George's hand SO TIGHT it was turning a ferocious almost dead colour.
Five hours. Seriously. Five hours of this!
When we landed and we were standing in the aisles waiting to get off the airplane, the guy just cooly looked over at me and said that his wife and friends went ahead, but he had to work so he was meeting everyone there for their vacation.
Huh?
Could he seriously NOT have told me that, like, FIVE hours ago???
He enjoyed himself way too much at the expense of this poor crazy bitch!
Jerk.
Posted by Rhonda at 8:00 PM

I can't say I blame you...that would have freaked me out too.

Just like Ronda said....only fun for you this time K? Have a blast! Lots of pictures and bring us something cool K?

Have fun. Relax. Restore. Recuperate. And above all, come home safely. This mama loves her babies too. And sweetheart, don't forget your passport!

funny - hope you are relaxing now!

OH! I can just imagine the tense feelings! how scary!

Hope you have a fantastic trip!

That is the funniest picture I have seen in a long time. Have a great trip!

I hope you have more fun this trip:-)

oh, my that made me laugh! have fun!

I have questions sometimes when I fly, but try not to think about it. Have a wonderful trip. We were there last year, and it's so much fun! Stop by when you can...

I think i would have had to eaten valium by the handfuls to get on a plane that soon. I hope you are enjoying your vacay, come back refreshed!

Well I don't want to laugh at your imagination but it WAS funny :))

I came here from Lilly's blog and I have to say, you deserve her award. I love your writing!