Mama Kat over at Mama's Losin' It has given us a few options today. I was supposed to post today about the negatives and positives in my blog world, but it will now be on Tuesday instead, so be sure to come back then for some amazing insight. :-)
I am choosing to write about the heart that wouldn't quit. I don't know if she means that literally (the actual organ) or figuratively (the spirit within) so I am going with the literal heart. Otherwise known as my grampa. 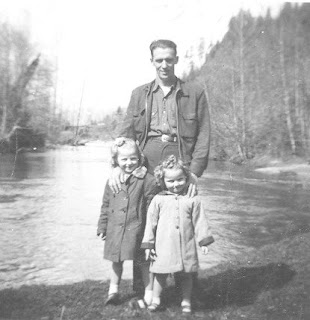 Grampa a very long time ago (1955?) with my mom and aunt.
My Grampa, had AAA (abdominal aortic aneurysm) surgery in May of 2001. While on the operating table he had a massive heart attack. While AAA surgery is not an easy surgery, it definitely wasn't expected to be the recovery that it was.
Grampa was in ICU for a long time. Intubated to boot. The poor guy could not speak. He also had early Parkinson's, and could not write very well. They tried to extubate after a little while, but his O2 immediately dropped so they intubated him again. Another little while passed. The longer a patient is intubated, the higher the risk of pneumonia. So they decided to try again. Grampa let them know, NO MATTER WHAT, that he was not to be intubated again. How awful must that be that you would chose to die than to have that thing shoved down there again?
Thankfully, this time he was able to breathe on his own. He stayed in for quite a while. My gramma was there every single day. Sitting by his bedside while his cranky self grumped at her. But spouses, they understand, and tolerate more than the average joe. He was suffering. He was tired of being in the hospital. He wanted his golf cart and his golf buddies. He wanted to feel normal again.
I asked the doctor (it's truly amazing how they will talk to you when you are wearing scrubs!) how long we could expect grampa to be with us, because he was not a candidate for open heart surgery. This doctor said he had seen patients last UP TO A YEAR on medical therapy alone.
Hmmm. So, that Christmas, we enjoyed having Grampa there with us. He didn't stay at my Mom's for long, though. He was still quite weak and less tolerant (okay, he was grumpy) of the hustle and bustle and noise that is Christmas.
Amazingly, huge thanks to my gramma, he was still with us the following Christmas.
And the next. 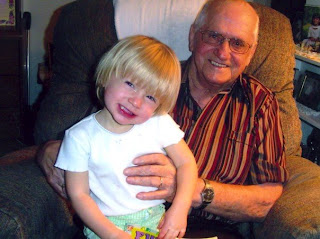 Grampa with my Liv, aka Bubble Bum as she was affectionately called by Grampa.
And the next.
And the next.
And the next (2006). Although this year he stayed at home and didn't come out to the family gathering. He was having a lot of trouble breathing. By now, he had a scooter, and his walker was kept beside the chair for his trips to the bathroom, and he was on oxygen.
In the spring of 2007, my gramma, who had not had a break for a single day since 2001, went to BC to see her family. Grampa went to respite for the weekend.
He hated it.
In, October, Grampa wasn't doing very well. He landed back in the hospital, and from there, since he was not well enough to go home, went back to respite, more a half-way house, until he improved enough to go home. He would go home for a check up by the program doctors where my grandparents lived and be told he wasn't quite well enough yet, and be sent back to the nursing home again.
In November, he went home for another checkup. He went upstairs to their apartment and sat in his chair. He announced that he had to go to the bathroom, which required help from the attendants, but before anyone could get there, he grinned and said "Oops, too late!" He was losing control of his bodily function now, and wore a diaper. He looked at my Gramma's ring that was her gift from him for their 60th wedding anniversary, which was coming up in a few months, and had just come in that week. He watched a TV show on his big-screen TV that had become a close and personal friend over the last couple of years, as his mobility went. He went downstairs with Gramma for Hymn time, and stood beside her. He was called by the nurses, because it was time for his check up.
He waved to Gramma and said "See you later, dear." And off he went upstairs, with his very favorite nurses.
He saw the doctor and told her that No Way was she gonna send him back to "that place". "I'll quit this program if I have to, but I WON'T go back there!"
And then he died.
The heart that just wouldn't quit finally quit. In a place he loved. With people he loved. Having one final chance to do the things he loved.
The nurse went back downstairs to get my Gramma. We all got phone calls. And the family, only 16 short months after Shelley, gathered around each other once again.
I had the honor of being one of the pallbearers. The grandchildren carried Grampa to his final resting place. Nothing in my life has ever been so difficult, yet I was so proud, and so honored to be able to do it.
So we will soon see a full year come around without my Grampa. It is still odd to think of him being gone.
But when you consider that doctor six and a half years earlier saying he could last up to a year, I can't help but be thankful for all the extra time we were given.
Grampa and Gramma, just six short weeks before he died.
November 6, 1919 - November 20, 2007
R.I.P. Grampa
I love you. 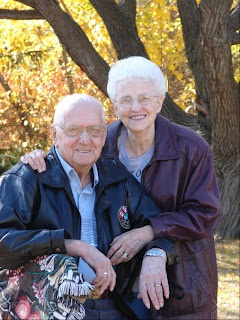 Oh the tears that pouring down my face. What a great post. I still to this day 8 years later expect to see my grandfather sitting in his chair when I go see my Nana. That is a great picture of the two of them!

Oh, I understand the job thing! My hubby also just changed jobs and eventually he will be making the same but for right now he took a pay cut and it's tough! We just figured that he needed to work less crazy hours and actually see his kids and go back to school! I think everyone is feeling the hit of the economy right now

For some reason, I got this little-known Roger Daultry song in my head now - called "The Heart Has Its Reasons."

What an amazing story. Isn't it great how strong our grandparents can be? My great-grandma is 93 & still living on her own. She's amazing.


Thanks for stopping by, I hope to see you around again.

Such a sweet and wonderful story. Thank you so much for sharing.

What a touching and beautiful story!

Oh, he sounds like such a fighter......they both look so happy together. Thank you for writing about him today!

Oh crap. I haven't even made it to the cafeteria for my first coffee of the day, and wham! Here I sit at my desk, tears making streaks through my carefully applied cosmetics, mascara running black down my cheeks, runny nose making me sniffle poetically – ah my darling. Thank you for the walk back through those years. We were lucky and blessed, weren't we! He was quite a guy, your grandpa! Lovely post. BTW, the travellers are in Bar Harbor, Maine, today, under overcast skies and a cool-ish temperature.

what a sweet story. thanks for sharing! Your grampa sounded like a great guy.

What a sweetheart your grampa seemed to be and I am sure he was. Sometimes after so much illness, they can't help but finally give up. Thanks for sharing that.

Wow, that was a great tribute to what sounds like an awesome man. Great job!

Your post is beautiful.
I didn't quite know what she meant either but I tackled this subject too..

The picture of your grandparents is adorable. May your memories of your grandfather always bring a smile to your face..

That is such a beautiful story. Your grandpa was quite a fighter. I absolutely love the pictures. They are priceless.

What a beautiful tribute to your grandpa. I bawled like a baby all the way through your story. Your love for him shows in every word you typed.

Oh he's so sweet. I have a cranky old Grampa too and they just have special places in our hearts, don't they!?!

What a sweet, sweet post! Aren't the Grans amazing? I'm so thankful that both my girls had my folks in their lives--they were so enriched by the love of their grandparents!

What a wonderful story, and so well told. I'm glad you got that 'extra' time with him. My dad had an AAA also and had surgery this past December.